History of Night Adoration and the ANF in the Phils.

†   Deeply inspired and convinced that IF GOD HEARD THE PRAYERS of those who kept a 24-HOUR VIGIL before the Blessed Sacrament for the return to Rome of Pope Pius VII who  in 1814 was taken by Napoleon Bonaparte to France as a prisoner,

†  Aglipayans and Protestants   (both of which have gained strength after Spain handed our country  to Americans.

†   This was the circumstance which prompted

Rev. Fr. VICTORIANO PASCUAL, SJ and DON EMILIO MA. MORETA (a regular donor and very pious parishioner) both from the Church of St. Ignatius in Intramuros, Manila, to introduce NOCTURNAL or NIGHT ADORATION of the Blessed Sacrament, an already very popular devotion around the world.

its  formal birth as an organization, however, came only about four (4)

centuries after, though the very piousendeavor of HERMAN COHEN, a former pagan musician-composer who was in charge of the choir at the Church of our Lady of Victoria in Paris, France.  Cohen’s conversion happened on a Sunday while disinterestedly conducting the choir during the Holy Mass.
†   At Benedictine time, as the priest raised the Blessed

Sacrament for everyone to adore, IT’S RAYS FELL ON COHEN, upon which he felt an invisible force, pushed him down to kneel on the pews and then heard a voice which told him—–

†   “HERMAN, FROM NOW ON, YOU ARE A CATHOLIC.”  Realizing how he had been touched by God, he profoundly thanked God, saying, “Lord, now that I have found you, I’ll never let You go!”

†   His deep love for God which seemed to have enveloped him was manifested one afternoon when he, instead of walking straight home, decided to pass by a chapel run by nuns.

†   Upon entering, he noticed that the nuns were holding a vigil

before an exposed Blessed Sacrament.

†   He decided to join them and, very soon, became absorbed in the thoughts and feelings of God that he never noticed that the clock had already struck 8 in the evening, and that it was already time to close the chapel.

†   The nuns requested that he leave.  Instead of leaving, though, he implored them to give him some more time to commune with God.  This was denied, however, and the nuns literally forced him out.  The next day he complained and poured out his disappointment before the priest appointed him choir master.

†   The priest tried to comfort Herman, telling him that it was the nuns’ policy.  However, the priest continued, if Herman could gather twelve (12) of his friends  to pray with him, then he would be glad to open the Tabernacle for them so they can hold their own VIGIL! 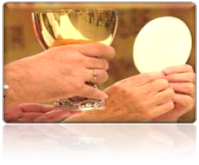 Herman presented not twelve (12) BUT TWENTY-SIX (26) men to the priest.  Feeling their deep desire and enthusiasm, the priest gladly opened the Tabernacle so they can hold a vigil.  It was the night which came to be considered the formal birth of NIGHT ADORATION as an Organization.

†   Herman, who continued to show his unwavering piety, soon joined the priesthood and was able to have a church built where night adoration was encouraged.  Through his pious efforts to practice and propagate night adoration,  he was, therefore, considered its FOUNDER.

†   Night adoration immediately spread in many countries.  Among these were Rome, Brazil, Mexico, and Spain.  Here in the Philippines, Rev. Fr. Victoriano and Don Emilio deeply considered introducing it to the Filipino faithful, NOT ONLY AS A SOURCE OF BLESSINGS FROM GOD, but at as the BEST RESPONSE to the New Code of Canon Law promulgated in 1917 which provides that a society of the Most Holy Sacrament of the Eucharist be established in every parish.

†   It was on October 9, 1920 in the Church of St. Ignatius in Intramuros, Manila, that a meeting was held.  All those who attended prayed during the night and agreed to establish the organization the day after.

†   Thus, on October 10, 1920, during the high mass in the church, Adoracion Nocturna Filipina (ANF) was established!

†   The members called themselves TURNO NO. 1 with Rev. Fr. Victoriano Pascual, SJ as the First Chaplain.

†   Turno No.1 had eighty (80) members when it started.  It was placed under the patronage of St. Francis Borja (himself a great devotee of the Most Holy Sacrament of the Eucharist) since it was on his feast day that the Adoracion was established.

†   Not long after, the ANF left the area of Intramuros as other Turnos also began to be established all throughout Manila and the suburban towns of Pasay, San Pedro, Makati, to as far as Quezon province in the south, and Bulacan in the north, so that  by the time Don Emilio vacated his seat in 1930,

†   There were already SEVENTY THREE (73) TURNOS in existence,

†   On March 2, 1925, Alfonso Leslapi D’ongray, President of the Venerable Archconfraternity of Night  Adoration of the Most Holy Sacrament of the Eucharist, sent an official document to the ANF, informing its officers and members that it has been officially affiliated with the Archconfraternity in Rome!

†   In 1930, Bro. Lucio Lucas took over the presidency on the ANF (then housed at the La Ignaciana Retreat House. This became the ANF’s official residence from 1926 to 1965, after relocating, as the space it

†   Occupied at the church of St. Ignatius could no longer accommodate the ANF’s growing population), then on the late 1990’s, it was officially transferred to the Xavier House in Sta. Ana, Manila, and finally at present, the ANF National Council officially occupies Room 305 of the Pius XII Catholic Center along United Nations Avenue, 1175 Manila.

†   With the help of Rev. Fr. Juan Anguela, SJ, more Turnos were established in several churches.  It then happened that those who aspired to become members of the pious society were no longer limited to men who reached the age of 22 for younger men, and boys, too, sought entry.

†   Not long after, Fr. Juan Anguela and Bro. Pedro had to admit the women as honorary members who expressed their desire to join.

†   Through the endeavors of Justice Pastor Endencia, a pioneer in the ANF, more Turnos in Naga City and Pangasinan were established.

†   From 1940 to 1970, the presidency was held by Bro. EUSEBIO GUTIERREZ.  It was during his term when the ANF had already established 162 Turnos and had more than 6,000 members that the Second World War broke out.

†   Despite the new threats of danger against the lives of the adorers, Bro. Eusebio continuously encouraged the members to remain steadfast in their vigils.

What is Night Adoration?

Why Adoration at Night?

What benefits can an adorer get from Adoracion Nocturna Filipina?

How can one be a member of Adoracion Nocturna Filipina?

To qualify as an Active Adorer:

Reception and Pledge of an Active Adorer

The Adoracion Nocturna Filipina has its own governing bodies which are in the ascending order – as follows:

The chief duty of all the governing bodies is to see to it that the purpose and spirit of the organization is preserved by the faithful observance of the Constitution and By-Laws.

All officers in charge of this organization are appointed.

These three words are expressed by the three signs or symbols:

“Love one another as I have loved you” has a note of urgency in the life of every adorer. He must be constantly reminded of this urgency by signs or symbols. It is the symbol of the A.N.F. Flag which evokes in his heart the spirit of Love of God and of neighbor embodied in Eucharistic Mystery

The Official greeting of this organization and must head all official communications is:

“THE LORD BE ADORED – FOREVER!

MEANING AND SYMBOL OF THE LOGO